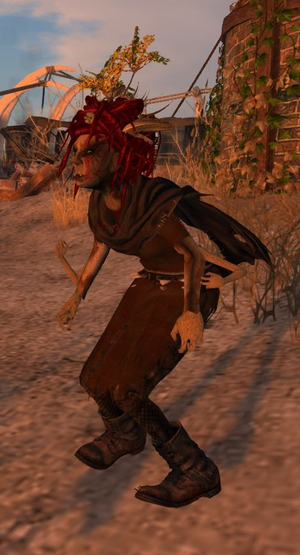 The Mutant Witch is played by Ccindy Pfeffer, and can frequently be found in The Great Fissure.

The Mutant Witch, more often known as "The Witch", is small and scrawny for Mutant standards. She seems even smaller than she appears, because she almost never stands straight up. Her skin has the colors and shapes of the sand. There are some tiny arms growing from her elbows that seem not fully functional, and she has fewer Fingers than one would expect. She wears her hair in an disorganized mess with spiky things and items of daily use woven into them. A smell of herbs and burned chemicals stick to her on most days.

The Witch is a talented shaman and knows the old ways of the mutant tribes, their medicine and wisdom. However, she is not very trusting to anyone who isn't a Mutant, and tends to react very aggressively if challenged.

Rumors About The Mutant Witch