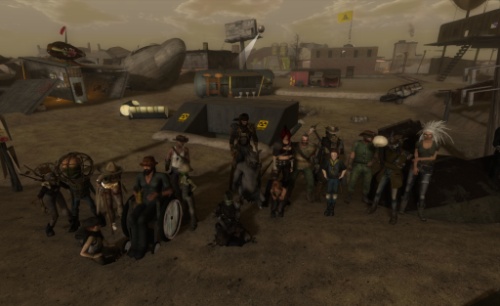 Here, you won't find clean and stylish homes, pristine and luxurious beaches, noisy dance clubs, tawdry sex palaces, or any of the glitz and glamor more common to Second Life. But in our parched deserts, rocky expanses, and rank swamps, you'll find beautifully ruined buildings, precarious shacks, and mysterious assemblages of abandoned material, most of it created by the people who live here. From hidden underground bunkers to teetering swamp huts on stilts, from burnt-out vehicles to nomad's tents, from helicopter concert stages to trap-ridden combat pits to ball courts to trade posts to working drive-in movie theaters, The Wastelands is filled with creative, detailed constructions.

But Wastelanders create more than just that. Tucked inside many merchants' builds (no garish signs or yard sales here!) you can find clothing and accessories, skins and shapes, hair and eyes, and everything you need to gear up as a filthy, ragged, post-apocalyptic survivor.

Perhaps the most famous and popular feature of The Wastelands, however, is the combat and salvage game. After "purchasing" and wearing your 100% free Wastelands HUD, you can scavenge the land for crates containing useful scrap. This scrap can be taken to the Salvage Machines, where -- if you lay down a valid combination of items -- it combines them into one new item. These new items can be combined as well, meaning Wastelanders can craft complex recipes for weapons, armor, belts, and more.

But it's no easy life for a Wastelander. Other players want these items just as much as you do, and may be prepared to fight for them! Use the weapons you've crafted to defend yourself. Perhaps you'll try to poison them with the sharp-fanged Rattlesnake. Or blast them with the commanding Slugthrower. Or use the vicious mace-like Kidneyburster to... you get the idea.

Be aware, though: by wearing the HUD, you are fair game for anyone to attack, for any reason, anywhere, anytime. But don't worry. Getting knocked unconscious only means you can't move for 90 seconds -- there's no stat loss, no item loss, and only as much dignity loss as you let yourself lose.

Need a certain item to complete a recipe, but just can't seem to find it? Barter with other players! Perhaps you can strike up a business deal, or even a new alliance. Lucky enough to have more scrap than you need? Sell it off for Linden Dollars at one of the various trading posts!

Would you like your searches and struggles to be part of a bigger story? Our rich, original roleplay populates The Wastelands with cunning Humans, decaying Ghouls, powerful Mutants, wily Manimals, and exotic Botans, all struggling to stay alive hundreds upon hundreds of years after the Fall of civilization. Join a clan and defend your territory against rivals, participate in occasional long-form Quests, or just hang out and talk. Our roleplay is casual, compelling without being controlling, community-run, and completely opt-in. You don't even have to apply! Just join the Ruin Nation: Official Wastelands RP group, wear your Ruin't Roleplayer tag, and strike up a conversation.

And as if all that weren't enough, there are community events held every week in The Wastelands. Go to Fight Night or War Zone for bloodthirsty combat. Listen to DJs at various venues. Gather up your teams for a Skull Ball tournament in Cormac. There have even been game shows and movie nights! Check the Events Calendar for more details - or to post your own event.

In many ways, Wastelanders are part of a community even when we're not inworld. The active Forums have Wastelands-related information and inspiration, as well as entirely off-topic discussions of music, books, movies and television, and abject randomness.

Welcome to The Wastelands. We're a different kind of nuclear family.