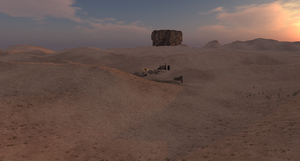 The Sand Seas is perhaps the most unique region in The Wastelands to date. It uses precisely-planned infrastructure in conjunction with clever LSL scripting and experience tools to give the region ten times the area of a normal region. Aesthetically, every area consists of rolling dunes and sparse vegetation. Eight of those ten areas have distinct landmarks that a resident could live on or in. Be wary though, and keep an eye out for the Dust Devil.

It should be noted that WL: Scarlet Spikeflower and WL: Green Prickly Ball Cactus exclusively spawn in the arid areas of this region.

If you choose to live at a landmark of The Sand Seas, please be aware of the following:

Because each of these landmarks is effectively in the sky, you won't be able to see the actual boundaries of your land. However, the estate has made a unique tool to help visualize where the parcel boundary actually is. Somewhere on each landmark is a skull, similar to the one pictured on the right. If you click the skull, it will rez an object to show where your parcel boundary is for that chamber. Click it again and it will go away. If you wish to purchase the parcel, stand within the parcel boundary and in your viewer's menu click World > About Land : Buy Land.

As mentioned earlier, this region consists of 10 areas. Each of them are distinct in their own way, and have a central identifying landmark. Below is a list of areas, and each pushpin icon will offer a link to each landmark. The start of the sprawling Sand Seas is reached by approaching the Southern border of the region at ground level.

A verdant growth of wildlife surrounds a placid pool of fresh spring water. This locale is often an adventurer's first and last stop within the vast Sand Seas, as it provides a brief and refreshing respite from the scorching desert sun. The Oasis is the most north east landmark of the Sand Seas.

A quiet and damp cave entrance bursts from the dunes. Rumors swirl that this location is the source of giant man-eating spiders coming from beneath the deep earth. Whether these rumors are true or not depends on how brave the individual adventurer is. What wonders or horrors are actually hidden in the dark? The Cave is west of The Oasis.

A large and sturdy building from the Old World stands out among the dunes, alongside a shattered road. It provides excellent shelter from the cold of the desert nights or the molten heat of the day. As one of the last bits of Old World civilization close to The Wastelands, its contents have long been thoroughly picked clean. But that doesn't mean it isn't a good place to rest.

The Warehouse is south of The Oasis.

A giant needle of rock reaches towards the heavens. Its crown is made of long-dead brush, feathers, and bones. The oldest legends whisper of a gigantic buzzard, larger than the largest Sand Hippo. Could this have been its home? If it was, those who live in the hollow of the spire must really appreciate that The Roc has been long gone.

Rocs Spire is south of The Cave.

The building here is dedicated to a strange Old World relic that was said to listen to the skies. The building has been empty for a long time now, and scavengers have even gone so far to tear down the walls of the basement - and to steal the pipes there, too. Still, shelter is shelter. And the basement provides security from the wild things that wander the dunes.

Satellite Station is south of The Warehouse.

You would think that such a well crafted yurt and collection of tents and huts would belong to a large and thriving clan. The yurt itself is empty, as if it was abandoned as soon as it was erected. The surrounding tents and huts seem recently lived in, and are even stocked with hard-to-find supplies. Just a little bit to the north, Henry can be found in his own tent, along with piles of books and various bits of paper. When asked, even he isn't sure who the camp belongs to.

A second cave entrance can be found jutting out of the massive stone cliffs to the north. What resides in the depths of this cave, no one is really sure. If you ask around about this second cave, some will simply respond "Cave is Cave".

Cave #2 is west of The Cave

It's one thing to hear rumors of giant insects and birds. It's another to have solid evidence of some sort of gigantic creature. If you manage to make it this far out, you're in for a treat! This long-dead serpentine fossil is one of the wonders of The Sand Seas. People have long tried to dig it up, but the sand carried on the winds only buries it again. Still, a few individuals have made its maw into a sturdy shelter. This is of the last stops before no man's land.

Serpents Fall is south of Cave #2

West of the Abandoned Nomad Camps and south of Serpent's Fall, there lies a fell land that few travelers have seen, that fewer have survived, and that fewer still will speak of. In their hollowed, haunted voices, they will say only this: that two vast and trunkless legs of stone stand in the desert, and near them, on the sand, a half-sunk, shattered visage lies. Nothing but windswept dunes surround it. And, if anyone passes the remains of the statue and into the dunes beyond, nothing ever returns. Nothing but the echoes of their brief and bloodcurdling screams.

The Sand Seas have long been known as an inherently dangerous place. If its endless dunes and lack of shelter don't kill an adventurer through sheer exposure, its many deadly inhabitants will. Reports of gigantic spiders and buzzards are all too common to be dismissed as outlandish rumors. But the greatest threats are still unknown, too mysterious even for rumors. Some travelers venture out, never be seen again. Others who've ventured here from afar report that they made it to The Oasis unmolested by anything worse than hunger pains or cactus needles - but bring tales of howling screams from beyond distant dunes.

As The Wastelands has grown and become more populated, scavengers have been under increasing pressure to find enough loot to make do. As such, a few brave souls seek to make these dangerous lands their homes. Perhaps they hope to find riches uncovered by the sandy winds that shift the dunes. Or perhaps they simply seek a place to live in hermitage.