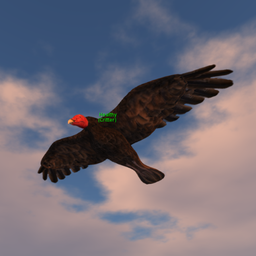 Sometimes majestic, and sometimes clumsy, the Turkey Buzzard is just a passive creature looking for a meal.

Buzzards will slowly and lazily circle around the region until provoked. They will also sometimes also come down to the ground on their own, but they prefer to stay out of danger in the skies. Due to their ornery nature, they will fiercely fight any attacker. This doesn't mean they're stupid though, if they're badly injured they may (but not always) flee.

WARNING: If you leave a region while fighting them they will regain their life in full, and they'll also projectile vomit all over you. The acidic and poison damage from this may immediately kill you. If not, you'll wish you were dead.

It is best to start the fight with a ranged weapon to get their attention if they're in the sky, and then switch to melee before they close the gap. If you're both patient and lucky enough, one may come down to the ground where you can then fight them.

Buzzards are also relatively frail, but due to the chaotic nature of how they fight they may pose a significant challenge for those who are not prepared.

Burnt Oak, Cormac, and The Rot. Every once in a blue moon, despite move constraints on their coding they will escape to neighboring regions.

Defeating a buzzard may reward one or more of the following items:

You may also occasionally be rewarded one of the following items: