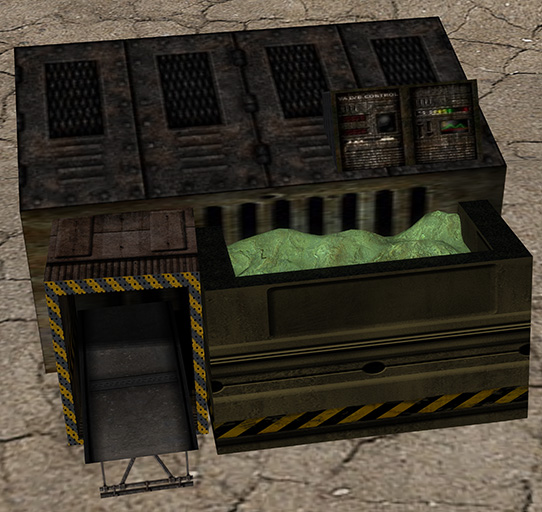 Long ago, a small pile of glowing green rocks was unearthed by the blowing sands of Hambone Slash, next to the old Arena. Wandering wastelanders quickly discovered the strange rocks could heal just about any injury simply by standing near them. Some even took to licking the rocks, thinking that doing so would grant faster healing or greater strength. Fights would quickly break out over who should control the strange rocks, with people endlessly attacking each other, while basking in the healing glow of the green stones.

The Tin Man saw the growing conflict, and removed the stones, instead splitting them up between two older non-functional Salvage Masheen units, placing one above Alden, and the other next to the Fight Night Arena. People quickly figured out, that the doors on these newly dubbed "Healing Masheens" would only open for a short time if they placed various salvage and items on the small conveyor belt, which were pulled into the Masheen, never to be seen again. Some theorize that these new Masheens break down the offered items, to be collected later as food for the Tin Man itself.

Just rez any WL item with a Barter Value on the conveyor belt of each Healing Masheen located here and here. Doing so will permanently destroy the item, and an amount of healing time will be added, depending on the BV of the item offered up. Simply standing next to the Healing Masheen will slowly regain health until the Masheen timer runs out.

Wasteland Land Owners will receive a small bonus of time added with every item rezzed by having their "Wastelander" group tag active when rezzing them item on the Healing Masheen.

Starting a fight at the Healing Masheen is not allowed. That said, the Healing Masheens are not a "safe spot". That means if you're fighting someone and run to a masheen expecting combat to suddenly end, it's not going to happen: nobody is obligated to stop fighting you because you're there. Do not camp near the masheen for weakened players: it's a public resource, and no individual or clan is meant to be able to control who can use it, or when. One-day game suspensions will be handed out to those doing starting-fights-at-Masheens shenanigans.