Fight Night is the first regular official event. It's held at an arena called the Potato Farm in The Wastelands, where people duel to the death. The arena was designed by Makaio Stygian as an outlet for residents to "do something" with the Wastelands Games, instead of brutally murder each other in the streets over and over.

First you must follow all the rules of the Wastelands games, as well as agree to the TOS and ROC.

Secondly you must have a Wastelands Hud and a weapon at minimum.

Thirdly you must show up and be ready on time, people who are late will not participate.

Finally, you must be able to follow simple directions from the host of the event.

Spectators are encouraged to use their melee Wastelands weapons on fighters who climb the fence during the match; if anything to encourage them to get back into the fight!

Winners are usually awarded a trophy and matching badge for an official event, and a random selection of in-game items for the top three finalists. All fighters receive a WL: Candy Scrit for their efforts.

There are one of three types of matches depending on player turnout, special events, of how the host feels. These are Point Matches, Tier Matches, or Tag Team matches. Each player sends the host an IM and is put on the fight roster. The roster is then "shuffled", and matches are made from that. In Point Matches, the roster is shuffled twice. Each game type requires that each player, or group of players wait in a holding cell until the arena buzzer signals the start.

Point matches are the most common type of match, each participant fights two matches, usually back to back based on the shuffled roster. They then play a second round of paired matches from the shuffled roster. Whoever has the most points wins. In the even of a tie, there will be sudden death match to determine the winner. Occasionally a group match of up to 4 players if 4 players are tied, last person standing wins.

Tiered matches are similar to point matches in that people fight through the roster. However winners keep fighting winners until there are two left, and losers fight losers until one loser is left. The losers in general have to fight a lot more to crawl back into the fight. The two winners and one loser then fight it out until they die. The first person to die takes third for the event, second person down takes second, and the last person standing is the winner.

Team matches are just like tiered or point matches, except two or more people are a team and progress through the ranks. 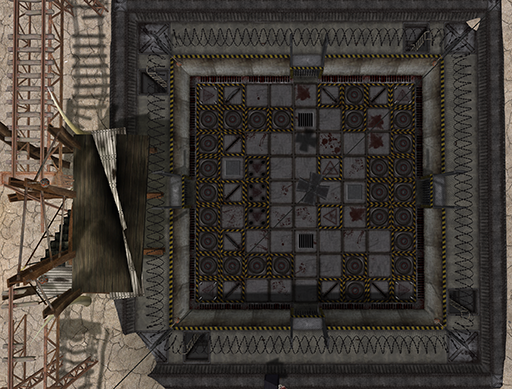 If you took the Thunderdome from The Road Warrior, and crossed it with the arena from Robot Wars, you have a pretty good idea of what the Potato Farm really is. The arena is a dynamically changing fight area, and is just as much if not more of a threat than the participants. It has the ability to store hundreds of map layouts, but currently has about a dozen "good maps". There's some we just don't use, because they're pretty unplayable. Currently only a select few people can set which maps are loaded, usually regular hosts or Wastelands Devs. There are plans to let residents control the maps in the future.

Trap tiles, and regular tiles are what make the Potato Farm what it is. There are currently ###### trap tiles.

Pit Tiles have become a lot more dangerous as of late, ever since the Tin Man flooded the lower parts of the Arena with molten lava from Fort Stygian. When a player steps on the pit tile, a door opens up under them, and they fall into a pit of burning rock, instantly setting them on fire and burning their feet quite badly.

The gas tile is the gamblers best friend. Sometimes it emits healing gas when triggered, other times a poison spray will hit you. And sometimes, it simply spits hot flame jets upwards.

Rotary saw blades move up and down at set intervals. Touching one will cause some damage, or bleed you, or both. In addition, you'll be thrown whatever direction the blade is facing, perhaps into another trap.

Stepping on a mine tile is probably not the best idea. The explosion will damage you, and if you don't die from the fire, perhaps being thrown into another trap will.

Stepping on the spike tile will cause four hydraulically pressured, poisoned tipped, 4 foot long spikes to shoot up through the floor. Needless to say those who trip this trap, do not live long.

With people trying to claw their way out, or hang onto the surrounding upper fence during fighting, the Tin Man quickly solved this issue by connecting some kind of battery to the chain link fence surrounding the Arena. Touching the fence will deliver a nasty shock, doing minor damage.