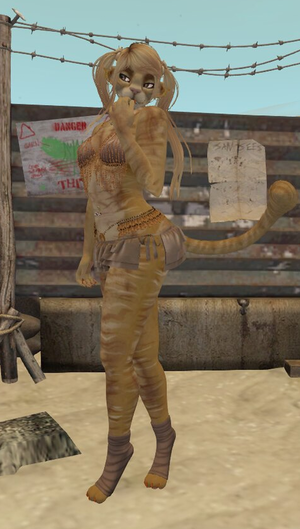 Winnie is played by Winston Chandrayaa, and can frequently be found in Fort Stygian.

Winnie is a large ginger sabretooth Mwrr. You'd think a crossdreser would take better care of their fur, especially with the skimpy outfits, but she tends to be grubby and matted; though (surprisingly) vermin-free.

She's often found running around the Sand Seas and poking things with a stick with general success. But you'd also think a carnivore manimal would be better at fighting. Sadly she's a regular blood "donor" at the potato farm.