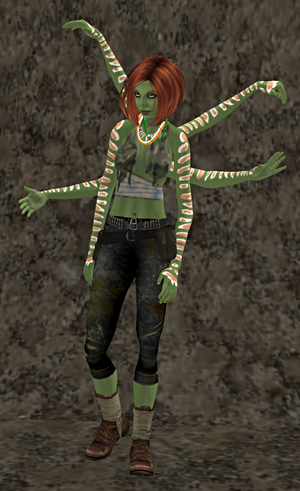 Nadie is played by Nadie Streeter, and can frequently be found in The Great Fissure.

She's a tall thin green mutant with six functional arms, coppery hair, and orange stripes. Her body language tends toward aggressive, and she paces a lot. Nadie is an Exiled Mutant.

She's good at dancing, hunting, fighting, boasting games, and socializing with other mutants. She's has trouble with any activities that require patience or focus and don't involve food or fighting.