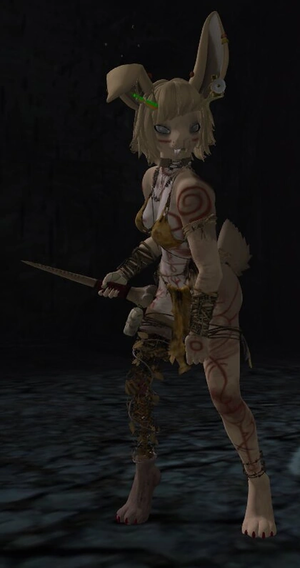 Beatrix is played by Beatrix Washborne, and can frequently be found at Fort Stygian.

Once a manimal but now a ghoul, Beatrix is a small desert jumper that has seen far better days, with various un-healed wounds that've matted her fur with blood, and missing a leg. The fungus is obviously the only reason she's still moving around, and even that is starting to visibly take a toll of its own.

She's a savvy trader, and quick to make a deal with anyone that'll talk to her. But complex thinking tends to just give her a headache. Even before the fungus took hold, big words confuse her to the point that she in turn manages to confuse anyone she's talking to.