From The Wastelands
Revision as of 13:32, 17 October 2020 by NeoBokrug Elytis (talk | contribs) (Created page with "__NOTOC__ {{Translation}} [[Image:Uncle Smirk.png|thumb|Uncle Smirk is played by [https://my.secondlife.com/cottonginandtonic cottonginandtonic], and can frequently be found i...")
(diff) ← Older revision | Latest revision (diff) | Newer revision → (diff)
Jump to navigation Jump to search 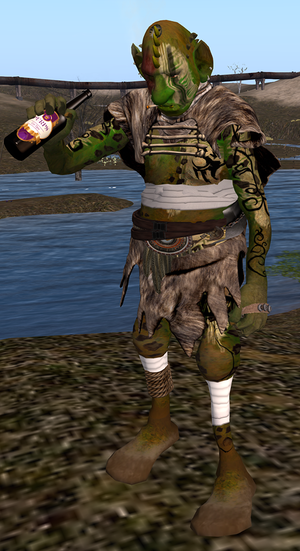 Uncle Smirk is played by cottonginandtonic, and can frequently be found in Hambone Slough.

Smirk is a squat, green and spotted mxiled mutant, with huge feet and a sloped face. His gravely voice is often slurred and more often than not he smells of booze. If he is not passed out he is trying to nest with any female within stumbling distance. Smirk’s darting tongue is long enough to reach the bottom of most bottles.

Smirk’s excels at drinking. He can also sniff out purple mushrooms like a hound. On the other hand, he's terrible at making friends and learning any meaningful lessons from any of his many mistakes.