I's somethin' what between a small town, a fort, an' what used to be called a shoppin' mall. Whate'er yer lookin' for - scrap, booze, food, a roof - we got it.

The idea behind the Trade Post is as old as the Wastelands themselves - a large open market for anyone to use to sell off scrap. The original Trade Post was the sole build in the Kronbelt barren sim and became an important hub of Wasteland life. The new Trade Post is located in the Junkyard, just in front of the telehub and is roughly one and a half times larger than the original while only using about a quarter of the land impact, thanks to the advancements of mesh in Second Life. The Trade Post stands as a community resource to be used as an open market by anyone and is also designed, from the ground up, as a haven for RP interactions (it is also one of the main sources of Firecracker! Cola in the Wastelands). Whether you simply want to set some things out to sell or you want to roleplay a trader, merchant, guard, or any other denizen of the Wastelands, this is the place to do it.

What's With The Crates?

The Trade Post maintains a prim reserve for the placement of scrap and other wasteland items, however some of it is very 'primly' and could eat up the budget fast. To combat the problem the Trade Post uses sculpted crates to sell scrap, as well as the paper baggie for food commonly seen in the wastes. We have three distinct shapes and sizes of crates and all of them are full perms. The full perms crates means you can resize them and reshape them to best accommodate the item being placed into it and that practice is very much encouraged (no one wants to buy a rifle from a palm sized box, it breaks the illusion). See the Joining the Trade Post section for further details on their use.

Hey, I'm New To The Wastelands and I Want To Live In The Trade Post!

OK! We have group roles set up for roleplayers who want to roleplay within the Post as well as people who want to live here. If you are new to the wastes and/or can't afford land, move into a container but know that if it gets crowded you may end up bunking with someone! There are nine containers that can be claimed as homes, each home have a 10-15 Land Impact allotment for decoration which is plenty for the type of squat you'll be inhabiting (Trade Post Foremen retain the right to ask you to remove decorations if they are inappropriate or clash with the overall aesthetic of the Post, so please decorate wisely). If more than nine people desire to bunk in the Trade Post, concessions will have to be made on both space (roommates will be a must) and Land Impact. Understand that the primary purpose of the Trade Post is trade, so prim budget/land impact will be allotted to the market first and foremost as it takes precedence. 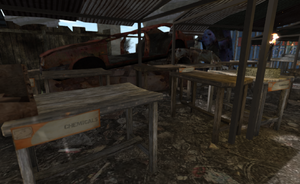 USE OF THE TRADE POST IS FREE (that means free from any fee in real money, L$ space bucks, scrap fees, or anything else. Nothing of any value, real or virtual, will be charged as a fee for the use of the Trade Post). IF ANYONE SAYS THAT THEY ARE TRADE POST STAFF AND ASKS FOR YOU SOMETHING, THEY ARE LIARS. INFORM JUBAL OR APO IMMEDIATELY.

Joining the Trade Post as a vendor is easy, you simply IM Jubal Quintus or Aposiopesis Fullstop and you'll be invited to the group and given the Trade Post Welcome Pack which includes crates and baggie with a self-naming script, a patch, and a button. You have to be in the group to place your items as the Trade Post land is set to 'group only' to avoid being filed with garbage prims. However, it is important to note that being a vendor in the Trade Post DOES NOT mean you are in a faction/gang/political group within the Wastelands, nor does it mean you owe the land owners anything; there is no charge of any type for using the Trade Post. Also, to note, the Trade Post has no group that deals in factional warfare or politicking, it is merely a neutral meeting ground for members of all factions to do business. Of course, you might run into your bitter enemy while at the Trade Post (they might be selling here too!), so it's best to come armed or with some back up if you are engaged in factional combat and roleplay.

This section outlines the rules of use for the Trade Post. They are very simple and so long as everyone follows them, we'll all be a big happy family...with guns...and the desire to murder each other.....well, ok, so we're not like a family at all.

Use of the Crates

When you join the group to sell items you are given a set of crates and a crate naming script, these are your tools as a seller.

To use a crate to sell scrap you have to follow a few basic rules dictated by Second Life's permission settings. First and foremost, the item needs to be IN the crate (in the Contents tab). Secondly, the crate needs to be set FOR SALE and the ORIGINAL box needs to be checked. Your sale will fail otherwise. Setting the crate to LEFT CLICK BUY OBJECT will help people who are looking through the crates for that special something.

The Trade Post believes in fair and honest trade that doesn't create a 'pay to win' environment that favors players with more money over those with less. As such the Trade Post endorses, but does not require, sale prices be set at a L$ price of no more than BV*10, capped around 1500L$. Each vendor is welcome to sell at whatever price they choose, this is merely the standard of trade that the Trade Post endorses as the wasteland standard.

To aid wastelanders in finding what they need quickly, we have set up "departments" within the Trade Post. The departments are simply paired tables designated with a sign for specific items. Each sign, when touched, will give you a notecard with a list of the items which that department holds. Most are common sense, a few are a bit of a stretch, but it's all in good fun. Some items listed are out of circulation and are only listed for old timers selling off older items as collectibles. Don't be upset if you can't find Basic Frame out in the salvage drops. If a department is getting full IM Jubal Quintus and he'll make more room.

The Trade Post Community has roles that were created for individuals who wish to RP some form of Trade Post denizen, be they vagrants, barflies, vendors, guards, and more. Anyone affiliated with the Trade Post will have a "Ruin't TP X" tag on. The Trade Post Community itself is not a gang or faction that is involved with the power struggles that happen in the Wastelands, though individuals who are TPC members are free to do so but never in the Trade Posts name. In some rare instances Trade Post business may take place outside of the confines of the post itself, but for the most part you won't see roving gangs of armed and bloodthirsty TPC members acting in the Trade Posts name whilst killing your dog or whatever. They might be hunting a thief or Trade Post law breaker though, they do that from time to time.

There are several in-game Laws in the Trade Post, which can also be seen posted by the gates.

Some of these make no sense. As the Trade Post is a community resource anyone may enforce the Trade Post laws, so long as the have a Ruin't TP tag. Individuals who flash around weapons will be asked to sling them or to leave. People who move to do violence on each other will be asked to take it outside the walls or, if they are true Wastelanders, to step into the ring and settle it with fist wraps. Stealing is pretty much not possible as a matter of SL permissions, however you can roleplay a thieving attempt just beware the guards. The rest are pretty self explanatory.