From The Wastelands
Revision as of 10:53, 15 January 2021 by NeoBokrug Elytis (talk | contribs) (Created page with "__NOTOC__ {{Translation}} [[Image:Drifter.webp|thumb|Drifter is played by [https://my.secondlife.com/wastelanddrifter wastelanddrifter], and can frequently be found in The S...")
(diff) ← Older revision | Latest revision (diff) | Newer revision → (diff)
Jump to navigation Jump to search 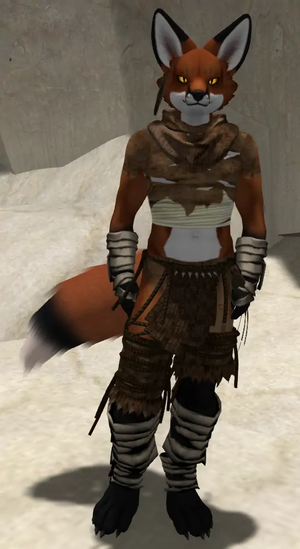 Drifter is played by wastelanddrifter, and can frequently be found in The Sand Seas.

Drifter has a lean build with common red slytooth markings red-orange fur with white chin down neck and chest, white tail tip, black ears and stocking markings from forearm to hands and knees to feet, a black tic on both sides of the nose, and gold eyes. He makes an attempt at grooming and some say he is good-looking by slytooth standards. Like others of his kind he has a strong scent from glandular secretion.

He excels at adapting to local conditions, hunting, tracking, and most aspects related to scavenging. But he has trouble being outgoing and talkative, or making eloquent conversation in the local human tongue.