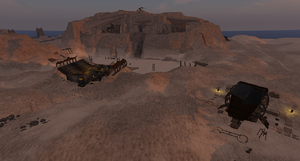 Cormac is a mysterious and barren region south of the Great Fissure, discovered by Sandusky Kayvon, the Relic Excavator. When his work on the southern border of the Fissure uncovered odd wreckage and strangely inscribed stone rings, his curiosity pressed further south beyond our borders. Upon arrival in Cormac, his work expanded tenfold.

The most prominent physical feature of Cormac is the High Mesa, a tall and wide expanse of rock and cliffs rising up from a windswept dusty salt flat. Clinging to the cliffs are a pair of ancient stone brick dwellings. Each abandoned complex shows unique signs of being fitted out by prior inhabitants in the not so distant past. Sandusky suspects that at least two unknown rival tribes once lived and fought here due to the defensive fortifications each one displays. What happened to them is still a mystery... However, one of the stone buildings hides a small cave, where Doktor Aeg has taken up residence.

Nestled into the navel of the High Mesa is a tall mine shaft, it's metal framing and weathered broken railway in a state of disrepair. The bottom of the shaft is closed off with wreckage and rocks from a prior cave-in. In time, Sandusky will venture at his risk to clear the wreckage and rock to see what, if anything, may lie below...

Perched upon the crest of the Mesa, are the High Mesa Hang-gliders. Scrapped together from metal and cables with tanned hide sails, these wings will let any scavenger take to the skies and see a buzzard's eye view of the Wastelands.

Note: Some lots and parcels do not have enough prims available on their property for the glider (19 Prims)to pass over. You may experience a sudden disappearance/lag effect from the auto-return of the glider. Try standing up or teleporting to somewhere nearby on the map to escape the effects (or relogging). It IS possible though to navigate throughout all of the sims if you learn what lots not to fly over.:)

Resting within the northern bank of the salt-flat, opposite of the High Mesa, is a very rare and odd structure...a carved stone block court buried in the sand with seating on both sides. Sandusky suspects the court, decorated with yellowed skulls, is not nearly as old as the cliff dwelling bricks but it definitely shares characteristics of their fortifications. Perhaps this was a shared and sacred ceremonial event space for those missing tribes in more peaceful times. Here they may have played some sort of game using the odd stone rings on the walls of the court. The truth may never be known and is largely irrelevant because Wastelanders have already taken it over for their own use to play the chaotic sport we call Cabeza Muerta. Faded bloodstains line the floor of the court, leading to morbid floor drains...

Resembling the wreckage he found on the southern borders of the Great Fissure, this strange desert stagecoach, once pulled by a team of sandworms, sits immobile and unused in the northwest corner of Cormac. It also bears signs in its construction of being related to the other tribal structures of the region. Remarkably, one of the sandworms still remain. Someone must care for the beast because Sandusky has spotted an odd character from a distance tending to it. This hunched and slouched stranger continues to elude Sandusky, easily running away and disappearing among the rocks of the mesa despite the pitch black night...

Cormac is one of the fifth through eighth sims to open on January 17th, 2008. Cormac is a Barren sim within the Wastelands estate, that means it has a prim bonus ratio of 1:4. 512sqm yields 29.25 prims. Cormac is a class five openspace sim. This sim is fully terra formable and estate rights are granted to it's owner. It's sub-theme, and general feel are dictated by the owner.