From The Wastelands
Revision as of 10:43, 15 January 2021 by NeoBokrug Elytis (talk | contribs) (Created page with "__NOTOC__ {{Translation}} [[Image:Baalzuni.webp|thumb|Baalzuni is played by [https://my.secondlife.com/houndstrikerx6 houndstrikerx6], and can frequently be found in North Y...")
(diff) ← Older revision | Latest revision (diff) | Newer revision → (diff)
Jump to navigation Jump to search 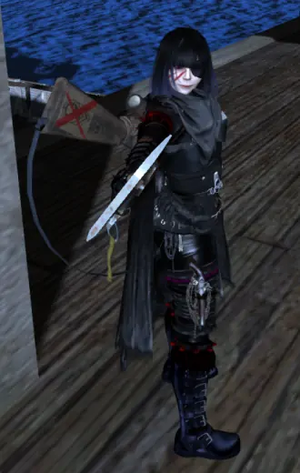 Baalzuni is played by houndstrikerx6, and can frequently be found in North Yard.

Baal is a pale, lean, and mid-sized human though taller than most cubs with raven colored hair. Therea are few scars sitting below his purple eye and a patch covering his other. His outfit varies from time to time, but he normally is dressed in black with pieces of metal running along his forearms and chest, complete with a rifle slung across his back.

Having lived through rough times most of his life, he has developed great skill in regarding combat, basic literature, thievery, and locating the source of a problem when tension arises. However, this makes him deluded that everything he does is justified, often looking down on others that don't understand him. This along with his bluntness tends to turn others away or even making enemies of him.